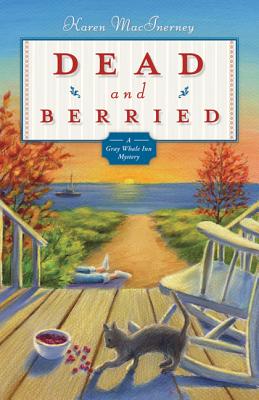 This is book number 2 in the Gray Whale Inn Mysteries series.

In this delicious follow-up to Murder on the Rocks, developers have returned to Cranberry Island. This time, they're planning to wipe out a natural cranberry bog, along with the island's namesake berries, to build a luxury subdivision. Natalie Barnes isn't sweet on the idea of commercial interests souring their cozy oasis, but the single innkeeper has other problems on her plate: a withering relationship with her best friend Charlene, the sudden appearance of her ex-fianc with a tempting proposal, and eerie bumps in the night suggesting the Gray Whale Inn is haunted. Worst of all, there's a killer on the loose, picking off people like ripe fruit. When Charlene's lover-the handsome chaplain with a stake in the development- is stabbed to death, Natalie promises to find the murderer for her griefstricken friend, who's also the number-one suspect.
In addition to writing, USA Today bestselling author Karen MacInerney teaches writers' workshops and drives a mean carpool. Her book Murder on the Rocks was selected as an Agatha nominee for Best First Novel. When she's not working on her next book or chauffeuring children, she loves to read, drink coffee, attempt unusual recipes, and hit the local hike-and-bike trail. Karen lives in Austin, Texas, with her two children and a rabbit named Bunny, and she escapes to Maine as often as possible.