Son of Neptune: The Graphic Novel (Heroes of Olympus) (Prebound) 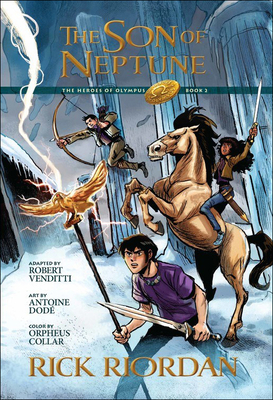 Percy is confused. When he awoke after his long sleep, he didn't know much more than his name. His brain-fuzz is lingering, even after the wolf Lupa told him he is a demigod and trained him to fight. Somehow Percy manages to make it to the camp for half-bloods, despite the fact that he had to continually kill monsters that, annoyingly, would not stay dead. But the camp doesn't ring any bells with him.
Hazel is supposed to be dead. When she lived before, she didn't do a very good job of it. When the Voice took over her mother and commanded Hazel to use her "gift" for an evil purpose, Hazel couldn't say no. Now, because of her mistake, the future of the world is at risk.
Frank is a klutz. His grandmother claims he is descended from ancient heroes and can be anything he wants to be, but he doesn't see it. He doesn't even know who his father is. He keeps hoping Apollo will claim him, because the only thing he is good at is archery-although not good enough to help the Fifth Cohort win at war games. His big and bulky physique makes him feel like a clumsy ox, especially in front of Hazel, his closest friend at camp. He trusts her completely-enough, even, to share the secret he holds close to his heart. Featuring a faithful adaptation by Robert Venditti, and incredible artwork by Antoine Dod and Orpheus Collar, Rick Riordan's blockbuster book comes to life in The Son of Neptune, The Graphic Novel.

Rick Riordan (www.rickriordan.com) is the author of three # 1 New York Times best-selling series with millions of copies sold throughout the world: Percy Jackson and the Olympians, the Kane Chronicles, and the Heroes of Olympus, and the newly launched series, Magnus Chase and the Gods of Asgard. His Greek myth collection, Percy Jackson's Greek Gods, was a #1 New York Times bestseller as well. His previous novels for adults include the hugely popular Tres Navarre series, winner of the top three awards in the mystery genre. He lives in Boston, Massachusetts with his wife and two sons. Robert Venditti is the "New York Times "best-selling author of "The Homeland Directive "and "The Surrogates," as well as "The Surrogates: Flesh and Bone." He also adapted the "New York Times "best-selling The Lightning Thief, The Graphic Novel; The Sea of Monsters, The Graphic Novel; Titan's Curse, The Graphic Novel and "Blue Bloods: The Graphic Novel." In 2012, he launched the critically acclaimed ongoing comic book series "X-O Manowar." He lives in Atlanta, Georgia. Visit his Web site at RobertVenditti.com.

Antoine Dod is an award-winning illustrator for his graphic novel work, including "Armelle et l'oiseau." He studied illustration in Brussels at St. Luc Institute and has illustrated numerous comics and graphic novels, including the miniseries "The Crow, Curare" written by James O'Barr.