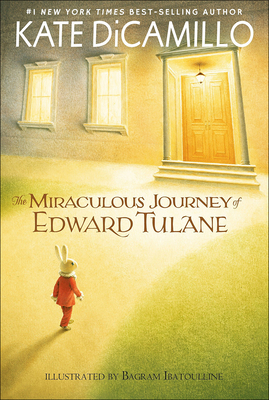 A classic tale by Newbery Medalist Kate DiCamillo, America's beloved storyteller
Once, in a house on Egypt Street, there lived a china rabbit named Edward Tulane. The rabbit was very pleased with himself, and for good reason: he was owned by a girl named Abilene, who adored him completely. And then, one day, he was lost. . . .
Kate DiCamillo takes us on an extraordinary journey, from the depths of the ocean to the net of a fisherman, from the bedside of an ailing child to the bustling streets of Memphis. Along the way, we are shown a miracle that even a heart of the most breakable kind can learn to love, to lose, and to love again.
Featuring black-and-white illustrations and a refreshed cover by Bagram Ibatoulline.

KATE DICAMILLO is the author of THE TALE of DESPEREAUX which received the Newbery Medal; BECAUSE of WINN-DIXIE, which received a Newbery Honor; THE TIGER RISING, which was named a National Book Award Finalist; and, most recently, the MERCY WATSON stories. She says, "One Christmas, I received an elegantly dressed toy rabbit as a gift. I brought him home, placed him on a chair in my living room, and promptly forgot about him. A few days later, I dreamed that the rabbit was face-down on the ocean floor - lost, and waiting to be found. In telling THE MIRACULOUS JOURNEY OF EDWARD TULANE, I was lost for a good long while, too. And then, finally, like Edward, I was found."

BAGRAM IBATOULLINE is the illustrator of CROSSING by Philip Booth; THE NIGHTINGALE by Hans Christian Andersen, retold by Stephen Mitchell; THE ANIMAL HEDGE by Paul Fleischman; HANA in the TIME of the TULIPS by Deborah Noyes; and THE SERPENT CAME to GLOUCESTER by M. T. Anderson. He says, "It was a singular and most pleasurable experience to work on the illustrations for EDWARD TULANE and to be there with him on his journey. I must admit, I'm a bit wistful now that I've come to the end of this very special book."