The House of Hades (Heroes of Olympus #4) (Prebound) 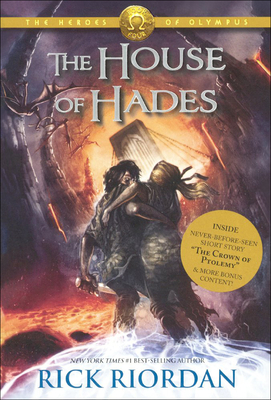 This is book number 4 in the Heroes of Olympus series.

At the conclusion of The Mark of Athena, Annabeth and Percy tumble into a pit leading straight to the Underworld. The other five demigods have to put aside their grief and follow Percy's instructions to find the mortal side of the Doors of Death. If they can fight their way through Gaea's forces, and Percy and Annabeth can survive the House of Hades, then the Seven will be able to seal the Doors from both sides and prevent the giants from raising Gaea. But, Leo wonders, if the Doors are sealed, how will Percy and Annabeth be able to escape? They have no choice. If the demigods don't succeed, Gaea's armies will never die. They have no time. In about a month, the Romans will march on Camp Half-Blood. The stakes are higher than ever in this adventure that dives into the depths of Tartarus.This paperback edition will include a never-before-seen short story, The Crown of Ptolemy, in which Percy and Annabeth fight alongside Carter and Sadie Kane, and more bonus content.

Rick Riordan (www.rickriordan.com) is the author of the # 1 New York Times best-selling Percy Jackson and the Olympians series, as well as the #1 best-selling The Heroes of Olympus series, and The Kane Chronicles series. His previous novels for adults include the hugely popular Tres Navarre series, winner of the top three awards in the mystery genre. He lives in Boston, Massachusetts with his wife and two sons.