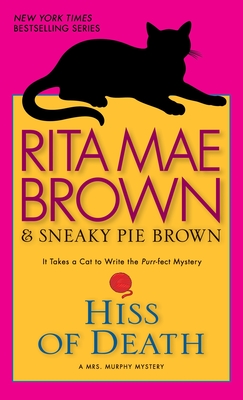 This is book number 19 in the Mrs. Murphy series.

Ah, spring! The brighter days and singing birds have a way of lifting people’s spirits, as well as those of their animal companions. But the season can also bring out the first blossoms of murder. As the redbuds open in Crozet, Virginia, Mary Minor “Harry” Haristeen is especially excited—until a health crisis sends her reeling into the forbidding world of hospitals and doctors, treatments and procedures. Surviving this journey will be tough, but Harry has her animal friends—and her ever-helpful husband, Fair—to support her. Others are considerably less fortunate: A promising nurse’s lifeless body is discovered without a mark on her. Then another hospital employee, who had seemed in perfect health, is also found dead. There’s a mystery afoot—and that’s one thing Harry and her menagerie can’t keep their noses out of.

Rita Mae Brown is the bestselling author of the Sneaky Pie Brown series; the Sister Jane series; A Nose for Justice and Murder Unleashed; Rubyfruit Jungle; In Her Day; and Six of One, as well as several other novels. An Emmy-nominated screenwriter and a poet, Brown lives in Afton, Virginia.

“[Rita Mae Brown] reunites the reader with beloved characters, supplies a wealth of local color and creates a killer whose identity and crimes are shocking.”—Richmond Times-Dispatch

“The paw-biting action . . . builds to the revelation of a surprising killer.”—Publishers Weekly