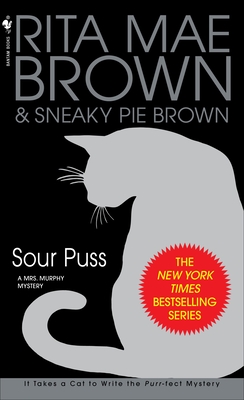 This is book number 14 in the Mrs. Murphy series.

Rita Mae Brown and her feline partner-in-crime-detection, Sneaky Pie Brown, return to the scene of their bestselling crimes—picturesque Crozet, Virginia. Love is in the air as spring comes to the small town, but no sooner has Mary Minor “Harry” Haristeen remarried than she is rudely interrupted—by murder. And no sooner does the trouble start than curious cats Mrs. Murphy and Pewter, along with corgi Tee Tucker, sink their claws into the case.…

After an unexpected rekindling of their romance, Harry and her veterinarian ex-husband, Fair Haristeen, have happily remarried. But the excitement of their nuptials is quickly overshadowed by the murder of Professor Vincent Forland, a world-famous grape and fungal expert who was in town visiting the local vineyards.

Within days of giving a lecture on how distilled fungus and cattle diseases are the current basis of chemical warfare, Forland’s decapitated body is discovered. After their initial fright, the residents of Crozet believe that this was a political murder and settle back into their routines–until a local is also found dead, killed in the same gruesome manner as Professor Forland. Now residents can’t help wondering, is this really the work of an outsider—or one of their own?

No longer working in the post office, Harry had just planted a quarter acre of grapes, which fuels her natural curiosity over just what the two murder victims knew and had in common. Once the warmth of spring arrives, the grapevines blossom and Harry’s furry entourage discovers the first critical clue. But how can they show the humans what they’ve learned? And how can they—or anyone—stop the killing?
Rita Mae Brown is the bestselling author of the Sneaky Pie Brown series; the Sister Jane series; A Nose for Justice and Murder Unleashed; Rubyfruit Jungle; In Her Day; and Six of One, as well as several other novels. An Emmy-nominated screenwriter and a poet, Brown lives in Afton, Virginia.