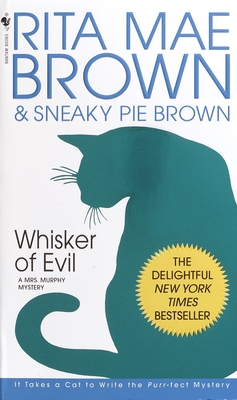 This is book number 12 in the Mrs. Murphy series.

A mysterious death in a Virginia farm town has the locals scratching their heads—while frisky feline Mrs. Murphy and her friends, fat-cat Pewter and corgi Tee Tucker, uncover clues as they curl their way around a cold-blooded killer.

This balmy summer in Crozet, Virginia, postmistress Mary Minor “Harry” Haristeen has a lot to think about. Things have been pretty cozy between her and her ex-husband, Fair and her beloved old post office is in danger of being replaced with a modern building—and modern rules. Harry’s thoughtful contemplation is shattered the day she stumbles over a dead body near Potlicker Creek. Barry Monteith, the handsome local horse breeder, has been savagely murdered. A true ladies’ man, Barry was known to have left a string of broken hearts behind him. But could a spurned lover be responsible for his untimely demise?

The plot only thickens when an autopsy reveals that Barry was infected with rabies weeks before he was killed. As usual, Harry can’t resist doing a little digging—with Mrs. Murphy close by to warn of approaching danger. Harry makes a remarkable discovery in the creek—the class ring of Mary Pat Reines, a local woman who disappeared thirty years earlier along with her prized Thoroughbred stallion. Like Barry, Mary Pat was a successful horse breeder—and now all of Crozet is wondering if the two cases are linked. As the police struggle with the evidence, the pressure gets hotter than a June afternoon—especially when another person is found dead of less-than-natural causes. As usual, Mrs. Murphy and her crew are the first to sniff out the truth.

But if they don’t find a way to help Harry piece together the puzzle, she could become the killer’s next target—and even Mrs. Murphy’s slinkiest moves won’t be able to save her.
Rita Mae Brown is the bestselling author of the Sneaky Pie Brown series; the Sister Jane series; A Nose for Justice and Murder Unleashed; Rubyfruit Jungle; In Her Day; and Six of One, as well as several other novels. An Emmy-nominated screenwriter and a poet, Brown lives in Afton, Virginia.