The Tail of the Tip-Off: A Mrs. Murphy Mystery (Mass Market) 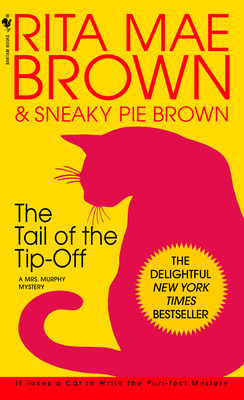 The Tail of the Tip-Off: A Mrs. Murphy Mystery (Mass Market)

This is book number 11 in the Mrs. Murphy series.

The Tail of the Tip-Off

When winter hits Crozet, Virginia, it hits hard--and hangs on for months. That’s nothing new to postmistress Mary Minor “Harry” Haristeen and her friends, who keep warm with hard work, hot toddies, and rabid rooting for the University of Virginia’s women’s basketball team at the old stadium affectionately dubbed “The Clam.” But the usual postgame high spirits are laid low when contractor H. H. Donaldson drops dead in the parking lot. And pretty soon word has spread that it wasn’t a heart attack that did him in. It just doesn’t sit right with Harry that one of her fellow fans--perhaps even an acquaintance or neighbor sitting close by in the stands--is a murderer. And as tiger cat Mrs. Murphy is all too aware, things that don’t sit right with Harry make her restless, curious, and prone to poking her not-very-sensitive human nose into dangerous places. So the animals start paying closer attention to what the people around them are doing--and they’re the first ones to realize when the next murder occurs.

It seems obvious to Harry that the deaths are connected--and she intends to find out exactly how. There’s no shortage of suspects, considering that H.H. was a ladies’ man who’d left a trail of broken hearts all over town--the most recent belonging to his wife-- and that the second murder victim was not very popular in Crozet.As the police launch their investigation, Harry picks up clues through savvy questioning of everyone she knows. But it’s the critters who are most attuned to trouble--they scent something wicked wafting Harry’s way on the tail of the next snowstorm. And as Harry draws closer to the truth about a brutal killer, Mrs. Murphy and her friends realize it’s up to them to make sure their intrepid mom lands on her feet.
Rita Mae Brown is the bestselling author of the Sneaky Pie Brown series; the Sister Jane series; A Nose for Justice and Murder Unleashed; Rubyfruit Jungle; In Her Day; and Six of One, as well as several other novels. An Emmy-nominated screenwriter and a poet, Brown lives in Afton, Virginia.