Cat on the Scent: A Mrs. Murphy Mystery (Mass Market) 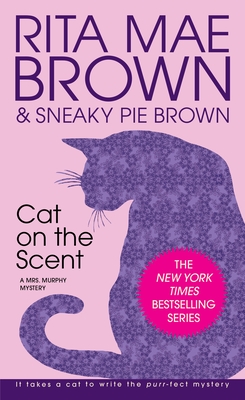 Cat on the Scent: A Mrs. Murphy Mystery (Mass Market)

This is book number 7 in the Mrs. Murphy series.

It takes a cat to write the purr-fect mystery.

Things have been pretty exciting lately in Crozet, Virginia—a little too exciting if you ask resident feline investigator Mrs. Murphy. Just as the town starts to buzz over its Civil War reenactment, a popular local man disappears. No one's seen Tommy Van Allen's single-engine plane, either—except for Mrs. Murphy, who spotted it during a foggy evening's mousing.

Even Mrs. Murphy's favorite human, postmistress Mary Minor "Harry" Haristeen, can sense that something is amiss. But things really take an ugly turn when the town reenacts the battle of Oak Ridge—and a participant ends up with three very real bullets in his back. While the clever tiger cat and her friends sift through clues that just don't fit together, more than a few locals fear that the scandal will force well-hidden town secrets into the harsh light of day. And when Mrs. Murphy's relentless tracking places loved ones in danger, it takes more than a canny kitty and her team of animal sleuths to set things right again....
Rita Mae Brown is the bestselling author of the Sneaky Pie Brown series; the Sister Jane series; A Nose for Justice and Murder Unleashed; Rubyfruit Jungle; In Her Day; and Six of One, as well as several other novels. An Emmy-nominated screenwriter and a poet, Brown lives in Afton, Virginia.

Sneaky Pie Brown, a tiger cat born somewhere in Albemarle County, Virginia, was discovered by Rita Mae Brown at her local SPCA. They have collaborated on numerous Mrs. Murphy mysteries—in addition to Sneaky Pie’s Cookbook for Mystery Lovers and Sneaky Pie for President.
"Leave it to a cat to grasp the essence of the cozy mystery: namely, murder among friends."—The New York Times Book Review

"Told with spunk and plenty of whimsy, this is another delightful entry in a very popular series."—Publishers Weekly