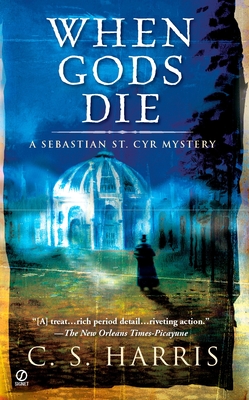 This is book number 2 in the Sebastian St. Cyr Mystery series.

The young wife of an aging marquis is found murdered in the arms of the Prince Regent. Around her neck lies a necklace said to have been worn by Druid priestesses-that is, until it was lost at sea with its last owner, Sebastian St. Cyr's mother. Now Sebastian is lured into a dangerous investigation of the marchioness's death-and his mother's uncertain fate.

As he edges closer to the truth-and one murder follows another-he confronts a conspiracy that imperils those nearest him and threatens to bring down the monarchy.
C.S. Harris graduated with a degree in Classics before earning a Ph.D. in European history. A scholar of the French Revolution and 19th-century Europe, she has lived in Europe and various far-flung parts of the old British Empire. She now lives in New Orleans with her husband, a retired Army Intelligence Officer, and two daughters.