The Firm: A Novel (CD-Audio) 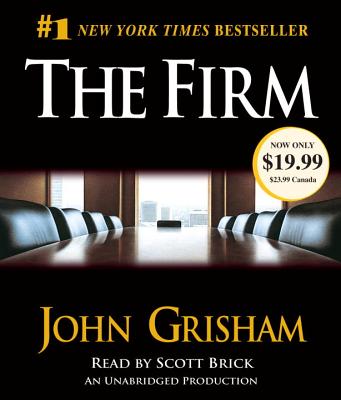 John Grisham's best-selling audiobook, The Firm, is now a series on NBC!

At the top of his class at Harvard Law, he had  his choice of the best in America. He made a deadly  mistake. When Mitch McDeere signed on with  Bendini, Lambert & Locke of Memphis, he thought he  and his beautiful wife, Abby, were on their way.  The firm leased him a BMW, paid off his school  loans, arranged a mortgage and hired him a  decorator. Mitch McDeere should have remembered what his  brother Ray -- doing fifteen years in a Tennessee  jail -- already knew. You never get nothing for  nothing. Now the FBI has the lowdown on Mitch's  firm and needs his help. Mitch is caught between a  rock and a hard place, with no choice -- if he  wants to live.

John Grisham is the author of twenty-three novels, including, most recently, The Litigators; one work of nonfiction, a collection of stories, and a novel for young readers. He is the Chairman of the Board of Directors of the Mississippi Innocence Project at the University of Mississippi School of Law. He lives in Virginia and Mississippi.


From the Hardcover edition.