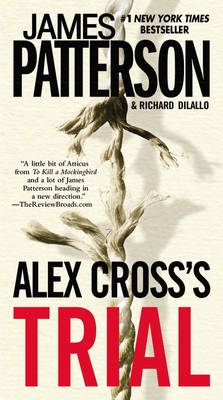 This is book number 1 in the Alex Cross Adventures series.

Written in the fearless voice of Detective Alex Cross, Alex Cross's Trial is a #1 New York Times bestseller of murder, love, and above all, bravery.

From his grandmother, Alex Cross has heard the story of his great uncle Abraham and his struggles for survival in the era of the Ku Klux Klan. Now, Alex passes the family tale along to his own children in a novel he's written-a novel called Trial.

As a lawyer in turn-of-the-century Washington D.C., Ben Corbett represents the toughest cases. Fighting against oppression and racism, he risks his family and his life in the process. When President Roosevelt asks Ben to return to his home town to investigate rumors of the resurgence of the Ku Klux Klan there, he cannot refuse.

When he arrives in Eudora, Mississippi, Ben meets the wise Abraham Cross and his beautiful granddaughter, Moody. Ben enlists their help, and the two Crosses introduce him to the hidden side of the idyllic Southern town. Lynchings have become commonplace and residents of the town's black quarter live in constant fear. Ben aims to break the reign of terror-but the truth of who is really behind it could break his heart. Written in the fearless voice of Detective Alex Cross, Alex Cross's Trial is a gripping story of courage in the face of prejudice and terror.
James Patterson has had more New York Times bestsellers than any other writer, ever, according to Guinness World Records. Since his first novel won the Edgar Award in 1977 James Patterson's books have sold more than 300 million copies. He is the author of the Alex Cross novels, the most popular detective series of the past twenty-five years, including Kiss the Girls and Along Came a Spider. He writes full-time and lives in Florida with his family.

"A compelling and unforgettable novel . . . A powerful drama and a gripping thriller - and the story that it tells is an important one."—Nights and Weekends.com

"A little bit of Atticus from To Kill a Mockingbird and a lot of James Patterson heading in a new direction."
—TheReviewBroads.com

"Fans of the Cross novels will find this book equally as enjoyable as any Cross book. IT CONTAINS THE SAME FAST PACE, TRUE-TO-LIFE CHARACTERS, AND GREAT STORYTELLING THAT ARE HALLMARKS OF VIRTUALLY EVERYTHING THAT PATTERSON WRITES."—TMRZoo.com

"A HAUNTING ACCOUNT OF A BLEAK TIME IN AMERICA'S HISTORY . . . A REVELATION."—BookReporter.com