Death of a Kingfisher (A Hamish Macbeth Mystery #27) (Mass Market) 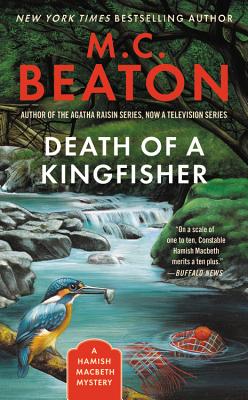 Death of a Kingfisher (A Hamish Macbeth Mystery #27) (Mass Market)

This is book number 27 in the A Hamish Macbeth Mystery series.

Death of a Kingfisher: A Hamish Macbeth Mystery

When Scotland is hit by the recession, Police Constable Hamish Macbeth notices that the Highland people are forced to come up with inventive ways to lure tourists to their sleepy towns. The quaint village of Braikie doesn't have much to offer, other than a place of rare beauty called Buchan's Wood, which was bequeathed to the town. The savvy local tourist director renames the woods "The Fairy Glen," and has brochures printed with a beautiful photograph of a kingfisher rising from a pond on the cover.

It isn't long before coach tours begin to arrive. But just as the town's luck starts to turn, a kingfisher is found hanging from a branch in the woods with a noose around its neck. As a wave of vandalism threatens to ruin Braikie forever, the town turns to Hamish Macbeth. And when violence strikes again,the lawman's investigation quickly turns from animal cruelty to murder.
M. C. Beaton has won international acclaim for her New York Times bestselling Hamish Macbeth mysteries. The BBC has aired 24 episodes based on the series. Beaton is also the author of the bestselling Agatha Raisin series, which will air as an eight-episode dramatic series on Sky1, starring Ashley Jensen. She lives in the Cotswolds with her husband. For more information, you can visit MCBeaton.com.