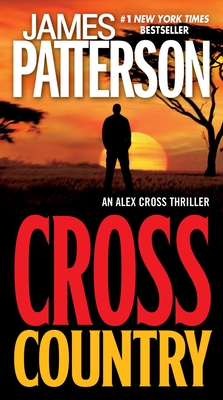 This is book number 14 in the Alex Cross series.

Unprotected and alone, Alex Cross is chasing a horrible new breed of killer. When the crimes hit close to home, he must hunt down the source . . . before it finds him first.
When the home of Alex Cross's oldest friend, Ellie Cox, is turned into the worst murder scene Alex has ever seen, the destruction leads him to believe that he's chasing his most dangerous enemy yet. As Alex and his girlfriend, Brianna Stone, become entangled in the deadly Nigerian underworld of Washington D.C., what they discover is shocking: a stunningly organized gang of lethal teenagers headed by a powerful, diabolical man-the African warlord known as the Tiger. Just when the detectives think they're closing in on the elusive murderer, the Tiger disappears into thin air. Tracking him to Africa, Alex knows that he must follow. Alone.
Heart-stopping, speed-charged, and electrifying, Cross Country is a stunning thriller from "the man who can't miss" (Time).
James Patterson has had more New York Times bestsellers than any other writer, ever, according to Guinness World Records. Since his first novel won the Edgar Award in 1977 James Patterson's books have sold more than 300 million copies. He is the author of the Alex Cross novels, the most popular detective series of the past twenty-five years, including Kiss the Girls and Along Came a Spider. He writes full-time and lives in Florida with his family.