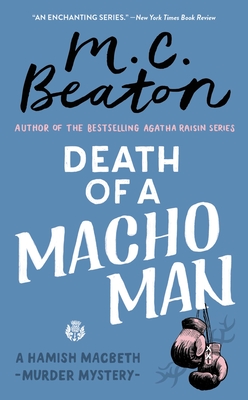 This is book number 12 in the A Hamish Macbeth Mystery series.

From the author of the Agatha Raisin television series...DEATH OF A MACHO MAN: A Hamish Macbeth MysteryWhen Hamish Macbeth, local constable of the Scottish village of Lochdubh, tries to break up one of the many fights involving Randy Duggan, the ruffian challenges him to a fistfight. But on the chosen day, Duggan is found shot to death and Macbeth is rumored to be the likely suspect. Macbeth must find the murderer, clear his name, and restore his Highland paradise to its usual tranquility.
M. C. Beaton has won international acclaim for her New York Times bestselling Hamish Macbeth mysteries. The BBC has aired 24 episodes based on the series. Beaton is also the author of the bestselling Agatha Raisin series, which will air as an eight-episode dramatic series on Sky1, starring Ashley Jensen. She lives in the Cotswolds with her husband. For more information, you can visit MCBeaton.com.