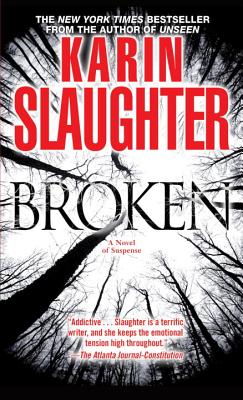 By Karin Slaughter
$7.99
Hard to Find

“Ahh, Karin Slaughter does flawed characters so well!! There are dirty cops with histories, indigent students trying to make a buck, more dirty cops who are trying to leave the past behind, the widowed medical examiner turned ER doc, and to top it all off there is Detective Will Trent, dyslexic, orphaned and passed around from foster home to foster home, whose challenges allow him to see things more clearly. In Broken, Trent, in his methodical, quiet, brilliant manner manages to break a criminal investigation of two murdered students in Grant County wide open;one that is being covered up from the top down. Once you start this, you will not want to stop reading!”
— Karen Ford, McLean & Eakin Booksellers, Petoskey, MI

When Special Agent Will Trent arrives in Grant County, he finds a police department determined to protect its own. Officer Lena Adams is hiding secrets from him, and while her role in the death of the county's popular police chief is unclear, that man's widow, Dr. Sara Linton, desperately needs Trent's help to crack the case of a prisoner's death. While the police force investigates the murder of a young woman pulled from a frigid lake, Trent investigates the police force. Caught between two complicated and determined women, trying to understand the facts surrounding Chief Tolliver's death, Trent will uncover explosive secrets--and confront a thin blue line that could be murderous if crossed.

Karin Slaughter is the New York Times and #1 internationally bestselling author of numerous thrillers, including Cop Town, Unseen, Criminal, Fallen, Broken, Undone, Fractured, Beyond Reach, Triptych, Faithless, and the e-original short stories "Snatched" and "Busted." She is a native of Georgia. From the Hardcover edition.

“Addictive . . . Slaughter is a terrific writer, and she keeps the emotional tension high throughout.”—The Atlanta Journal-Constitution

“This chilling mystery is just begging to be read in one sitting.”—Cosmopolitan