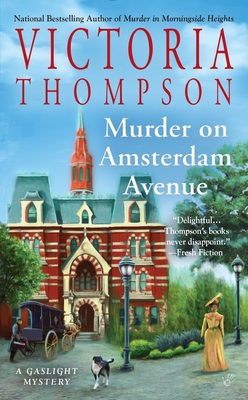 This is book number 17 in the A Gaslight Mystery series.

In this mystery From the national bestselling author of Murder on Trinity Place, midwife Sarah Brandt and former police detective Frank Malloy investigate a murder in the secretive, high-society world of nineteenth-century New York City...

In the midst of Sarah and Frank’s wedding preparations, Sarah accompanies her mother on a condolence call to the Upper West Side, where Charles Oakes, the son of family friends, has died unexpectedly after suffering from a mysterious disease. But Charles’s father believes his son was poisoned, and would like Sarah and Frank to look into the matter with the utmost discretion.

Putting off their own personal affairs, Sarah and Frank soon learn that not everyone wants to know more about Charles’s death, particularly if he was murdered. As they unravel secrets that reach back to the Civil War, they also discover that they are in the company of a very present danger...
Victoria Thompson is the Edgar® and Agatha award–nominated author of the Gaslight Mysteries—including Murder in Morningside Heights, Murder on St. Nicholas Avenue, and Murder in Murray Hill—as well as numerous historical novels. She lives in Western Pennsylvania with her family.
“Delightful...Thompson’s books never disappoint.”—Fresh Fiction

“This long-lasting series . . . has lost none of its interest or attraction. . . . Thompson has always vividly shown the life of the rich and the very poor of the city. . . . This is a strong tale, emotionally and historically, and a puzzling mystery.”—RT Book Reviews (4 1/2 Stars, Top Pick)