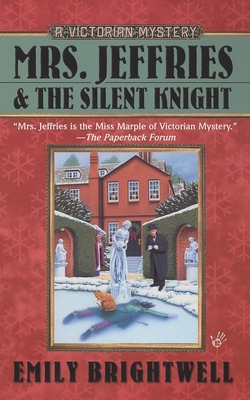 This is book number 20 in the A Victorian Mystery series.

Sir George Braxton was found lying face down in a frozen fountain with the back of his skull bashed to bits.  The case is complicated by a distinct lack of holiday cheer in the victim’s three argumentative middle-aged daughters and their sullen houseguests.  Even the cranky cat hates everyone. To top it all off, the Home Secretary has called in Inspector Witherspoon over the heads of some touchy local lads, making matters stickier than a plum pudding.  Only the help of his housekeeper, Mrs. Jeffries, and her crime-solving staff will give the poor Inspector any chance of sleeping in heavenly peace on Christmas Eve…

She keeps house for Inspector Witherspoon…and keeps him on his toes. Everyone’s awed by his Scotland Yard successes—but they don’t know about his secret weapon. No matter how messy the murder or how dirty the deed, Mrs. Jeffries’ polished detection skills are up to the task…proving that behind every great man there’s a woman—and that a crimesolver’s work is never done.