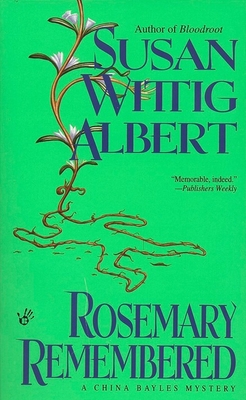 This is book number 4 in the China Bayles Mystery series.

Something about the murder of an accountant just doesn't add up in this China Bayles mystery from New York Times bestselling author Susan Wittig Albert.

China's herb shop in Pecan Springs wasn't a big business, but it kept her busy. So she brought her taxes to Rosemary Robbins, an accountant who reminded China a bit of her former self—preoccupied, distracted, maybe a bit overstressed. Still, Rosemary always seemed pleasant, and China wished she could get to know her better. Now, though, the chance is gone.

Driving out to Rosemary's house on an errand, China discovers her accountant has been murdered. With one abusive ex-husband and plenty of former clients in the picture, there's no shortage of suspects. And with a vengeful ex-convict on the loose, there's plenty for China to worry about. And as the evidence unfolds, she's more determined than ever to make the killer pay...
Susan Wittig Albert grew up on a farm in Illinois and earned her Ph.D. at the University of California at Berkeley. A former professor of English and a university administrator and vice president, she is the author of the China Bayles Mysteries, the Darling Dahlias Mysteries, and the Cottage Tales of Beatrix Potter. Some of her recent titles include Widow’s Tears, Cat’s Claw, The Darling Dahlias and the Confederate Rose, and The Tale of Castle Cottage. She and her husband, Bill, coauthor a series of Victorian-Edwardian mysteries under the name Robin Paige, which includes such titles as Death at Glamis Castle and Death at Whitechapel.