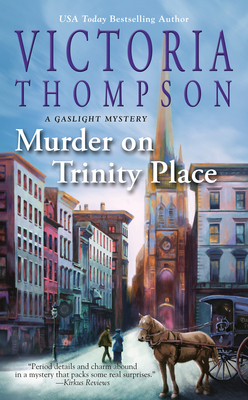 This is book number 22 in the A Gaslight Mystery series.

The devil's in the details when a man is found murdered near Trinity Church in the latest installment of the national bestselling Gaslight Mystery series...

The year of 1899 is drawing to a close. Frank and Sarah Malloy are getting ready to celebrate the New Year at Trinity Church when they notice Mr. Pritchard, a relative of their neighbor's, behaving oddly and annoying the other revelers. Frank tries to convince Pritchard to return home with them, but the man refuses and Frank loses him in the crowd. The next morning Sarah and Frank are horrified to learn Pritchard was murdered sometime in the night, his body left on Trinity Place, the side street near the church.

The police aren't too interested in the murder, and the family are concerned that the circumstances of the death will reflect badly on Pritchard's reputation. To protect the family from scandal, Nelson asks Frank to investigate. Frank and Sarah delve into Pritchard's past and realize there may have been a deadly side to the dawning of the new century.
Victoria Thompson is the Edgar® and Agatha award-nominated author of the Gaslight mysteries--including Murder on Union Square, Murder in the Bowery, Murder in Morningside Heights, and Murder on St. Nicholas Avenue--as well as numerous historical novels. She lives in the Chicago area with her family.
Praise for the Edgar® and Agatha award-nominated Gaslight mysteries

"A fascinating window into a bygone era."--Kirkus Reviews

"Gangs of New York, eat your heart out--this book is the real thing."--Mystery Scene
"Enthralling...Fascinating characters with a story to tell."--Fresh Fiction