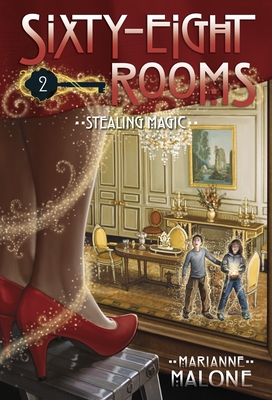 This is book number 2 in the The Sixty-Eight Rooms Adventures series.

Fans of magic, mystery, and adventure will love this rollicking sequel to The Sixty-Eight Rooms—a perfect next step for kids who love the Magic Tree House series, and just right for readers who love Chasing Vermeer, The Mixed-Up Files of Mrs. Basil E. Frankweiler, and Wonderstruck. Sixth graders Ruthie and Jack thought their adventures in the Thorne Rooms were over, until miniatures from the rooms start to disappear. Is it the work of the art thief who's on the loose in Chicago? Or has someone else discovered the secret of the Thorne Rooms' magic? Ruthie and Jack's quest to stop the thief takes them from modern day Chicago to 1937 Paris to antebellum South Carolina. But as more items disappear, including the key that allows them to shrink and access the past worlds, what was once just an adventure becomes a life and death race against the clock. Can Ruthie and Jack catch the thief and help the friends they meet on the way before the magic—and the rooms—are destroyed forever?

MARIANNE MALONE is the mother of three grown children, a former art teacher, and the cofounder of the Campus School Middle School for Girls in Urbana, Illinois. She and her husband divide their time between Urbana and Washington, D.C. For Teacher's Guides (including common core tie-ins) and more, visit MarianneMalone.com.