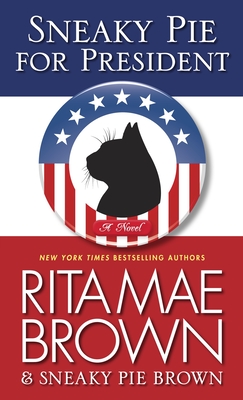 This is book number 21 in the Mrs. Murphy series.

Tired of politics as usual? Despair not: Rita Mae Brown’s intrepid feline co-author, Sneaky Pie, is taking time off from her busy schedule writing bestselling mysteries to run for President of the United States. It’s never too late to start! With help from her friends—the irascible gray cat Pewter, the wise Corgi Tee Tucker, and Tally, the exuberant Jack Russell—Sneaky crisscrosses her home state of Virginia hoping to go where no cat since Socks Clinton has gone: 1600 Pennsylvania Avenue. After all, who better to get the economy purring again than an honest tabby with authentic political stripes? Sneaky has an animal-friendly agenda to unify all Americans—regardless of whether they walk on two or four feet or even if they fly.

Human candidates have had their chance in Washington, and nowhere does it say in the Constitution that the next president cannot be a cat. Vote Sneaky!

Includes a preview of Rita Mae Brown and Sneaky Pie Brown’s next Mrs. Murphy mystery, The Litter of the Law
Rita Mae Brown is the bestselling author of the Sneaky Pie Brown series; the Sister Jane series; A Nose for Justice and Murder Unleashed; Rubyfruit Jungle; In Her Day; and Six of One, as well as several other novels. An Emmy-nominated screenwriter and a poet, Brown lives in Afton, Virginia.

Sneaky Pie Brown, a tiger cat born somewhere in Albemarle County, Virginia, was discovered by Rita Mae Brown at her local SPCA. They have collaborated on numerous Mrs. Murphy mysteries—in addition to Sneaky Pie’s Cookbook for Mystery Lovers and Sneaky Pie for President.
“A deft combination of entertainment and education, Brown’s latest will resonate with anyone concerned about the future of the nation—and the world.”—Richmond Times-Dispatch