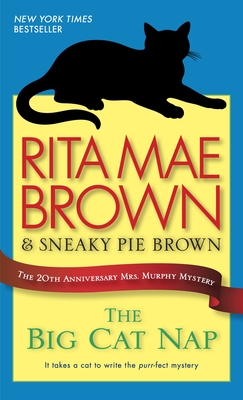 This is book number 20 in the Mrs. Murphy series.

It’s mid-May and murder is once again in full bloom in Crozet, Virginia—or so it seems to Mary Minor “Harry” Haristeen. The trouble begins when Harry’s dear friend Miranda Hogendobber takes her on a leisurely drive that ends in a narrow drainage ditch. The chaos continues when the Very Reverend Herbert Jones’s Chevy pickup also abruptly goes kaput. But these vehicular mishaps are nothing compared to the much more distressing state of a mechanic discovered by Harry in a local repair shop: His head’s been bashed in. Despite numerous warnings from her much-loved coterie of friends, human and otherwise, Harry quickly surmises that the time has come to pop the hood and conduct her own investigation. Her animal companions see disaster fast approaching but can do little except try their best to protect their foolishly intrepid human. Harry’s race to the truth leads straight to powerful forces determined to avoid scrutiny at any cost—even if it means running Harry Haristeen off the road for good.

Includes a preview of Rita Mae Brown and Sneaky Pie Brown’s next Mrs. Murphy mystery, The Litter of the Law

“Harry and her pals are on the case. . . . [Brown] fills the series with rich central Virginia color, and readers will greet the recurring characters with fondness.”—Richmond Times-Dispatch

“[A] delightful book.”—Huntington News
Rita Mae Brown is the bestselling author of the Sneaky Pie Brown series; the Sister Jane series; A Nose for Justice and Murder Unleashed; Rubyfruit Jungle; In Her Day; and Six of One, as well as several other novels. An Emmy-nominated screenwriter and a poet, Brown lives in Afton, Virginia.