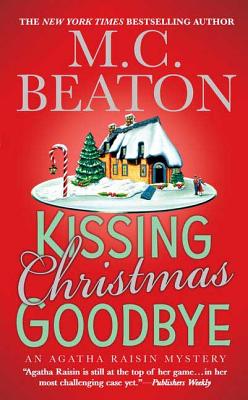 By M. C. Beaton
Email or call for price.
Out of Print

This is book number 18 in the Agatha Raisin Mysteries series.

Unlike quite a number of people, Agatha had not given up on Christmas. To have the perfect Christmas had been a childhood dream whilst surviving a rough upbringing in a Birmingham slum. Holly berries glistened, snow fell gently outside, and inside, all was Dickensian jollity. And in her dreams, James Lacey kissed her under the mistletoe, and, like a middle-aged sleeping beauty, she would awake to passion once more....

Agatha Raisin is bored. Her detective agency in the Cotswolds is thriving, but she'll scream if she has to deal with another missing cat or dog. Only two things seem to offer potential excitement: the upcoming Christmas festivities and her ex, James Lacey. This year she is sure that if she invites James to a really splendid, old-fashioned Christmas dinner, their love will rekindle like a warm Yule log.
When a wealthy widow hires Agatha because she's convinced a member of her family is trying to kill her, Agatha is intrigued---especially when the widow drops dead after high tea at the manor house. Who in this rather sterile house, complete with fake family portraits, could have hated the old lady enough to poison her?
Agatha sets out to find the murderer, all the while managing a pretty, teenage trainee who makes her feel old and planning for a picture-perfect Christmas, with James, all the trimmings, and perhaps even snow.

M. C. Beaton, who was the British guest of honor at Bouchercon 2006, has been hailed as the "Queen of Crime" (The Globe and Mail). In addition to her New York Times and USA Today bestselling Agatha Raisin novels—now a hit show on Acorn TV and public television—Beaton is the author of the Hamish Macbeth series and many Edwardian mysteries. Born in Scotland, she currently divides her time between the English Cotswolds and Paris.

“Few things in life are more satisfying than to discover a brand-new Agatha Raisin mystery.” —The Tampa Tribune on M. C. Beaton and the Agatha Raisin Series

“Anyone interested in...intelligent, amusing reading will want to make the acquaintance of Mrs. Agatha Raisin.” —The Atlanta Journal-Constitution on M. C. Beaton and the Agatha Raisin Series

“[M. C. Beaton] is Britain's successor to Dame Agatha Christie. If you've never read an Agatha Raisin novel, it's time to start.... All of them are cunningly plotted, beautifully written, and more fun than you can imagine.” —The Globe and Mail on M. C. Beaton and the Agatha Raisin Series

“[Agatha] is a glorious cross between Miss Marple, Auntie Mame, and Lucille Ball, with a tad of pit bull tossed in. She's wonderful.” —St. Petersburg Times on M. C. Beaton and the Agatha Raisin Series