The Secret of the Key (Hardcover) 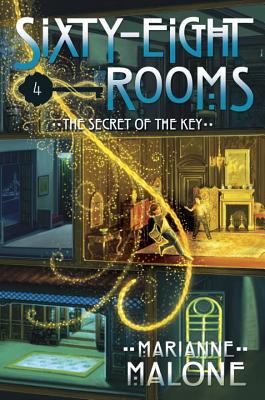 This is book number 4 in the Sixty-Eight Rooms Adventures series.

Filled with magic, mystery, miniatures, and adventure, the Sixty-Eight Rooms is the perfect series for fans of "Chasing Vermeer, The Mixed-Up Files of Mrs. Basil E. Frankweiler, " and "The Dollpeople"
Chicago sixth graders Ruthie and Jack think they ve learned everything about the magic of the Art Institute's Thorne Rooms. But the magic starts to act strangely when Ruthie and Jack discover two rings that are out of place and out of time and a portal that shouldn t be open but somehow is. Ruthie and Jack follow the clues to seventeenth-century England and the Brownlow house, where they meet the Brownlow's governess, Rebecca. But Rebecca has a few secrets of her own and she might even be in the wrong century Can Ruthie and Jack discover the truth about Rebecca's mysterious past, or will they end up stuck in the wrong century themselves? Their quest for answers takes them from 1930s New York City and San Francisco to turn-of-the-century China. The only one who can truly answer their questions may be the woman who started it all: the room's creator, Narcissa Thorne. But to talk to Mrs. Thorne, they ll have to go back in time and find her
Unlock the magic . . . in the exciting conclusion to the Sixty-Eight Rooms Adventures

MARIANNE MALONE is the mother of three grown children, a former art teacher, cofounder of the Campus School Middle School for Girls in Urbana, Illinois and popular speaker in schools. Marianne says, ""Writing is a kind of conjuring. I write because I believe in the magic of art to transport . . . to give a of glimpse another's world." For Teachers Guides (including common core tie-ins) and more, visit MarianneMalone.com.