Black Diamond: A Mystery of the French Countryside (Hardcover) 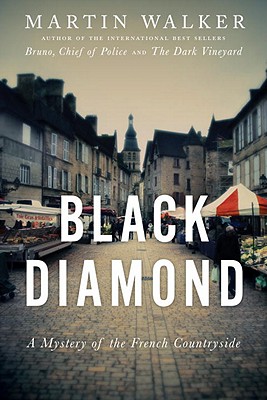 The third installment in Martin Walker's delightful, internationally acclaimed series featuring Chief of Police Bruno.
Something dangerous is afoot in St. Denis. In the space of a few weeks, the normally sleepy village sees attacks on Vietnamese vendors, arson at a local Asian restaurant, subpar truffles from China smuggled into outgoing shipments at a nearby market all of it threatening the Dordogne's truffle trade, worth millions of dollars each year, and all of it spelling trouble for Benoit Bruno Courreges, master chef, devoted oenophile, and, most important, beloved chief of police. When one of his hunting partners, a noted truffle expert, is murdered, Bruno's investigation into the murky events unfolding around St. Denis becomes infinitely more complicated. His friend wasn t just a connoisseur of French delicacies, he was a former high-profile intelligence agent and someone wanted him dead.
As the strange crimes continue, Bruno's detective work takes him from sunlit markets to dim cafes, from luxurious feasts to tense negotiations from all of the paradisial pleasures of the region to its shadowy underworld and reunites him with a lost love, an ambitious policewoman also assigned to the case. Filled with an abundance of food and wine (including, bien sur, many, many truffles) and a soupcon of romance, Black Diamond is a deliciously entertaining concoction that delivers all the complexity and delights of the Dordogne itself.

Martin Walker is senior director of the Global Business Policy Council and editor in chief emeritus and international affairs columnist at United Press International. His previous Bruno novels, Bruno, Chief of Police and The Dark Vineyard, were published to international acclaim. He lives in Washington, D.C., and the southwest of France. www.brunochiefofpolice.com

“Martin Walker’s series is Kool-Aid for Francophiles and a potion to convert remaining skeptics to the joie de vivre that infuses French life . . . [Black Diamond] has all the elements that have attracted a large and growing following to the novels—an endearing hero who is not only a jack of all trades but also master of them, an idyllic village in southern France steeped in culinary tradition, and a host of quirky but lovable local characters . . . Everyone needs a friend in southern France to go spend some time with, and Walker has opened Bruno’s door to anyone who has a few hours to join him in the simple joys of la vie en rose.”
-Darrell Delamaide, Washington Independent

“Before you crack open the pages of Walker’s new novel, make sure and pour yourself a glass of red wine. Better have some cheese with a baguette close at hand too, because this book is deliciously good . . . While the plot is a page-turner, the real allure of this novel lies with the author’s other ingredients: the rich French food, the historical detail of the picturesque region and the eccentric cast of characters, including a truffle-hunting basset hound named Gigi . . . An enticing mix of the savory and suspenseful, a recipe for a great read.”
-Christian DuChateau, CNN

“A charming French village, great food, eccentric characters and a mystery to nudge things along . . . Bruno Courrèges, the village’s brave, brainy and only policeman, has his hands full . . . Bruno traces the links among [the book’s] events, revealing unsavory secrets from France’s colonial history. On the other hand, he eats some memorable meals—and they’re savory indeed.”
-Adam Woog, The Seattle Times

“Gallic charm suffuses Walker’s third mystery of the French countryside . . . Like the aroma of amateur chef Bruno’s venison stew, which virtually leaps off the pages, Walker’s unmistakable affection for the ‘enchanting Périgord’ makes every morsel of this cozy-cum-crime novel a savory delight.”
-Starred review, Publishers Weekly

“A paean to the truffle . . . This political thriller is supplemented by a glorious foodie’s delight, from an author who knows his way around the French passions.”
-Kirkus

“Murder and misdeeds keep French policeman Bruno Courrèges on his toes in this third installment in Walker’s consistently charming series . . . Bruno may be a small-town cop, but he’s anything but small-minded. Walker has created a character who’s endearingly human and worldly wise.”
-Booklist