Missing the Target: Why Stock-Market Short-Termism Is Not the Problem (Hardcover) 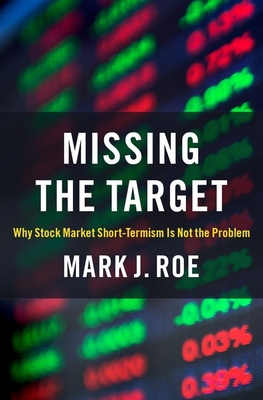 Missing the Target: Why Stock-Market Short-Termism Is Not the Problem (Hardcover)


Special Order - Subject to Availability
Why stock-market short-termism is not causing severe damage to the American economy According to many political leaders, pundits, and corporate lawmakers, stock-market-driven short-termism - when corporations prioritize immediate results in the next quarter over their longer-term interests - is harming the American economy. This view, popular in influential circles, sees
short-termism as causing sharply declining research and development (R&D), too many stock buybacks, and severe environmental harm. But the data fits badly with this black-and-white representation of short-termism. Mark J. Roe analyzes the best data on R&D, corporate borrowings and buybacks, and long-term investment trends to show that stock market short-termism is not at the root of these economic problems. The book shows that blaming short-termism overlooks the real causes of declining investment, R&D
changes, and environmental deterioration. By pointing to other sources of tension like accelerating technological change, rising political uncertainty, and repeated economic disruptions, Missing the Target argues for a more nuanced understanding of the challenges to the American economy. Roe
disproves many of the core claims against short termism. R&D spending, for example, is rising faster than the economy is growing. It's government R&D support that's been falling. Reversing that decline is the best first target for bettering American R&D. Missing the Target deepens the discussion of the American economy by analyzing the factors that contribute to current trends and by making a bold but straightforward claim: stock market short-termism is not the problem.

Mark J. Roe is the David Berg Professor of Corporate Law at Harvard Law School. His research focuses on corporate structures and how they relate to politics, interest groups, and popular opinions of the corporation.