The Most Southern Place on Earth: The Mississippi Delta and the Roots of Regional Identity (Paperback) 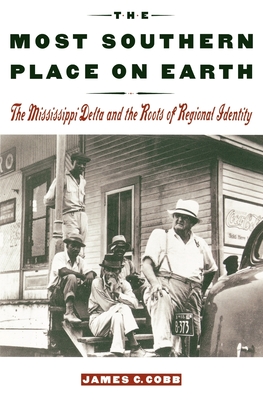 The Most Southern Place on Earth: The Mississippi Delta and the Roots of Regional Identity (Paperback)


Usually Ships in 1-2 Days
"Cotton obsessed, Negro obsessed," Rupert Vance called it in 1935. "Nowhere but in the Mississippi Delta," he said, "are antebellum conditions so nearly preserved." This crescent of bottomlands between Memphis and Vicksburg, lined by the Yazoo and Mississippi rivers, remains in some ways what it was in 1860: a land of rich soil, wealthy planters, and desperate poverty--the blackest and poorest counties in all the South. And yet it is a cultural treasure house as well--the home of Muddy Waters, B.B. King, Charley Pride, Walker Percy, Elizabeth Spencer, and Shelby Foote. Painting a fascinating portrait of the development and survival of the Mississippi Delta, a society and economy that is often seen as the most extreme in all the South, James C. Cobb offers a comprehensive history of the Delta, from its first white settlement in the 1820s to the present. Exploring the rich black culture of the Delta, Cobb explains how it survived and evolved in the midst of poverty and oppression,
beginning with the first settlers in the overgrown, disease-ridden Delta before the Civil War to the bitter battles and incomplete triumphs of the civil rights era.
In this comprehensive account, Cobb offers new insight into "the most southern place on earth," untangling the enigma of grindingly poor but prolifically creative Mississippi Delta.

James C. Cobb is Bernadotte Schmitt Professor of History at the University of Tennessee, Knoxville. His books include The Selling of the South, Industrialization and Southern Society, and The New Deal and the South.