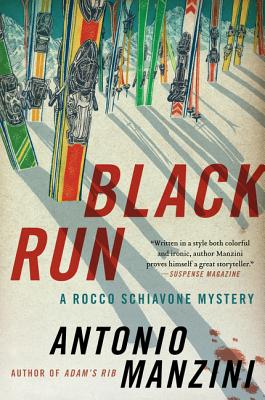 Already an international hit, a sly, sizzling mystery—the first in a sensational crime series—set in the Italian Alps, reminiscent of the works of Andrea Camilleri, D. A. Mishani, Donna Leon, and Henning Mankell.

Getting into serious trouble with the wrong people, deputy prefect of police Rocco Schiavone is exiled to Aosta, a small, touristy alpine town far from his beloved Rome. The sophisticated and crotchety Roman despises mountains, snow, and the provincial locals as much as he disdains his superiors and their petty rules. But he loves solving crimes.

When a mangled body has been discovered on a ski run above Champoluc, Rocco immediately faces his first challenge—identifying the victim, a complex procedure complicated by his ignorance of the customs, dialect, and history of his new home. Proud and undaunted, Rocco makes his way among the ski runs, mountain huts, and aerial tramways, meeting ski instructors, Alpine guides, the hardworking, enigmatic folk of Aosta, and a few beautiful locals eager to give him a warm welcome.

It won't be easy, this mountain life, especially with a corpse or two in the mix. But then there's nothing that makes Rocco feel more at home than an investigation.

An insightful observer of human nature, Antonio Manzini writes with sly humor and a dash of irony, and introduces an irresistible hero—a fascinating blend of swagger, machismo, and vulnerability—in a colorful and atmospheric crime mystery series that is European crime fiction at its best.

Antonio Manzini is an actor, a screenwriter, a director, and the author of two murder mysteries featuring Deputy Police Chief Rocco Schiavone. Black Run is the first of these novels to be translated into English. He lives in Italy.

“Written in a style both colorful and ironic, author Manzini proves himself a great storyteller.” — Suspense Magazine

“Don’t miss Black Run for the excitement, suspense, and yes, horror of a fine mystery. And meet Rocco who is a man who makes and breaks his own rules.” — Bookloons.com

“The ranks of impressive Euro Noir novelists is swelled by the gritty Antonio Manzini, whose Black Run may sport epigraphs from Schilller and Mayakovsky, but underlines its genre-credentials with a superstructure of diamond-hard crime writing..this is lacerating stuff.” — Financial Times

“What keeps the reader glued to the story is Rocco. He’s fascinating in his contradictions…Fans of Andrea Camilleri’s Sicily-set “Inspector Montalbano” series will enjoy this debut mystery for its sly humor, vividly drawn characters, and amusing cultural clashes between rugged mountaineers and the more urbane southerner.” — Library Journal (starred review)

“At last a detective who’s not haunted by personal demons or soaked in booze…He’s a coarse, violent and engaging policeman who would not be out of place in a James Ellroy masterpiece. The tale is deftly told with sharp, cynical dialogue. Let’s hear more of Schiavone.” — Daily Mail (London)

“Surly, moody, individualistic, unconventional, corrupt, abusive, with a dark past, Rocco Schiavone seems to come from the dark metropolis of a novel by James Ellroy.” — L'Indice

“Rocco Schivone is as bad a cop as Lt. Kojak. Dishonest, potentially violent, intolerant of the rules, but he also has a talent for the job he does … an unusual character … Noir with a touch of dark irony.” — Repubblica

“Fine humor and satire…BLACK RUN is set in a beautifully described area of Italy’s ski resort region, with excellent characterizations and plot lines, genuinely funny asides and running tirades from Rocco, a truly good story, written with style and flair.” — Over My Dead Body (blog)

“A fascinating mystery…Manzini is a mature and polished writer…very good at what he does.” — Reviewing the Evidence