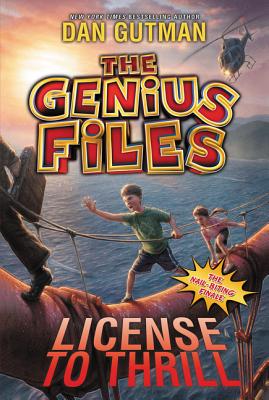 This is book number 5 in the Genius Files series.

The most exciting road trip in history has reached its final destination! In this fifth book in the thrilling, New York Times bestselling adventure series, Coke and Pepsi McDonald make it back home to the West Coast—but they’re far from home free!

When we last left our heroes, Coke and Pepsi McDonald were in Roswell, New Mexico, and they had just seen a strange beam of light. Now their cross-country road trip is about to take a detour that's out of this world—literally!

Once the twins get their feet back on the ground, they embark on the final leg of their trip, which will take them from the Hoover Dam all the way to the Golden Gate Bridge. Chased by nefarious villains, the twins will be trapped with a venomous snake, pushed through a deadly turbine, and thrown into a volcano. And craziest of all, their parents might finally believe them!

With Dan Gutman’s laugh-out-loud humor and featuring photos and weird-but-true American tourist destinations like the Alien Fresh Jerky Stand, The Genius Files is a one-of-a-kind mix of geography and fun.