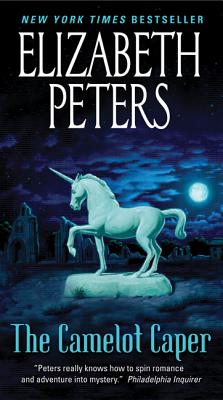 For Jessica Tregarth, an unexpected invitation to visit her grandfather in England is a wonderful surprise—an opportunity to open doors to a family past that has always been closed to her. But sinister acts greet her arrival. A stranger tries to steal her luggage and later accosts her in Salisbury Cathedral. Mysterious villains pursue her through Cornwall, their motives and intentions unknown. Jessica's only clue is an antique heirloom she possesses, an ancient ring that bears the Tregarth family crest. And her only ally is handsome gothic novelist David Randall—her self-proclaimed protector—who appears from seemingly out of nowhere to help her in her desperate attempt to solve a five-hundred-year-old puzzle. For something from out of the cloudy mists of Arthurian lore has come back to plague a frightened American abroad. And a remarkable truth about a fabled king and a medieval treasure could ultimately make Jess Tregarth very rich . . . or very dead.

Elizabeth Peters earned her Ph.D. in Egyptology from the University of Chicago’s famed Oriental Institute. During her fifty-year career, she wrote more than seventy novels and three nonfiction books on Egypt. She received numerous writing awards and, in 2012, was given the first Amelia Peabody Award, created in her honor. She died in 2013, leaving a partially completed manuscript of The Painted Queen.