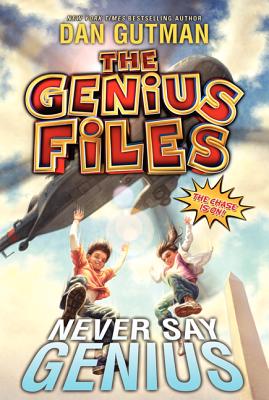 This is book number 2 in the Genius Files series.

The most exciting road trip in history continues! In this second book in the thrilling, New York Times bestselling adventure series, twelve-year-old twins Coke and Pepsi McDonald see the Midwest like you’ve never seen it before.

They never asked to be geniuses. They never asked to get lowered into a basket of boiling French fries, either. And they certainly never asked to be frozen in soft-serve ice cream, stampeded in a wild stadium riot, or kidnapped on a high-speed roller coaster. But that's what happens when a red-haired villain named Archie Clone is chasing you across America. This just might be the most dangerous road trip in history—and the most awesome!

With Dan Gutman’s laugh-out-loud humor and featuring photos and weird-but-true American tourist destinations like the National Mustard Museum, The Genius Files is a one-of-a-kind mix of geography and fun.

Don't miss the next action-packed book, The Genius Files #3: You Only Die Twice!

Kids will appreciate the book for its nonstop action and goofball humor.
— School Library Journal