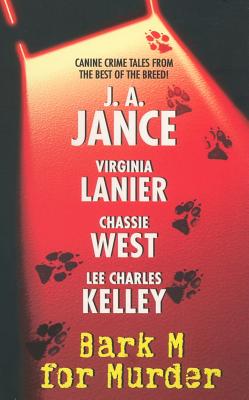 Evildoers beware! Four of mystery fiction's top storytellers are setting the hounds on your trail -- in an incomparable quartet of crime stories with a canine edge. Man's (and woman's) best friends take the lead in this phenomenal collection of tales tense and surprising, humorous and thrilling.

J. A. Jance is the New York Times bestselling author of the J. P. Beaumont series, the Joanna Brady series, the Ali Reynolds series, and five interrelated thrillers about the Walker family, as well as a volume of poetry. Born in South Dakota and brought up in Bisbee, Arizona, Jance lives with her husband in Seattle, Washington, and Tucson, Arizona.

Virginia Lanier lives on the edge of the Okefenokee Swamp in Echols County, Georgia.

Lee Charles Kelley is a successful New York dog trainer whose critiques of the alpha theory and operant conditioning have made him a controversial figure in the dog world. The author of five previous novels featuring Jack Field—Dogged Pursuit, 'Twas the Bite Before Christmas, To Collar a Killer, Murder Unleashed, and A Nose for Murder—Mr. Kelley lives on the island of Manhattan with a Dalmatian named Fred.