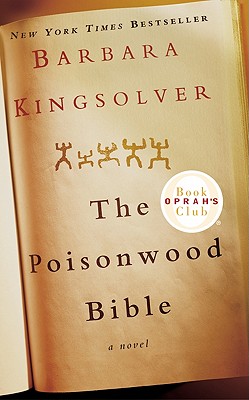 The Poisonwood Bible is a story told by the wife and four daughters of Nathan Price, a fierce, evangelical Baptist who takes his family and mission to the Belgian Congo in 1959. They carry with them everything they believe they will need from home, but soon find that all of it—from garden seeds to Scripture—is calamitously transformed on African soil. What follows is a suspenseful epic of one family’s tragic undoing and remarkable reconstruction over the course of three decades in postcolonial Africa.

The novel is set against one of the most dramatic political chronicles of the twentieth century: the Congo's fight for independence from Belgium, the murder of its first elected prime minister, the CIA coup to install his replacement, and the insidious progress of a world economic order that robs the fledgling African nation of its autonomy. Taking its place alongside the classic works of postcolonial literature, this ambitious novel establishes Kingsolver as one of the most thoughtful and daring of modern writers.

Barbara Kingsolver is the author of nine bestselling works of fiction, including the novels, Flight Behavior, The Lacuna, The Poisonwood Bible, Animal Dreams, and The Bean Trees, as well as books of poetry, essays, and creative nonfiction. Her work of narrative nonfiction is the enormously influential bestseller Animal, Vegetable, Miracle: A Year of Food Life. Kingsolver’s work has been translated into more than twenty languages and has earned literary awards and a devoted readership at home and abroad. She was awarded the National Humanities Medal, our country’s highest honor for service through the arts, as well as the prestigious Dayton Literary Peace Prize for her body of work. She lives with her family on a farm in southern Appalachia.

“There are few ambitious, successful and beautiful novels. Lucky for us, we have one now, in Barbara Kingsolver’s The Poisonwood Bible . . . this awed reviewer hardly knows where to begin.”
— Jane Smiley, Washington Post Book World

“A powerful new epic . . . She has with infinitely steady hands worked the prickly threads of religion, politics, race, sin and redemption into a thing of terrible beauty.”
— Los Angeles Times Book Review

“Powerful . . . Kingsolver is a gifted magician of words.”
— Time

“Beautifully written . . . Kingsolver’s tale of domestic tragedy is more than just a well-told yarn . . . Played out against the bloody backdrop of political struggles in Congo that continue to this day, it is also particularly timely.”
— People

“Tragic, and remarkable. . . . A novel that blends outlandish experience with Old Testament rhythms of prophecy and doom.”
— USA Today

“The book’s sheer enjoyability is given depth by Kingsolver’s insight and compassion for Congo, including its people, and their language and sayings.”
— Boston Globe